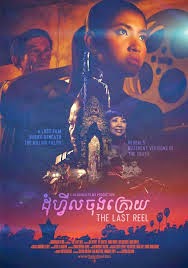 So how many of the world's evil dictators can you name?
I reckon everyone will automatically think of Hitler, Stalin and Saddam Hussein but in the same breath would come Pol Pot.
In the 1970s, the news was dominated by the genocide in Cambodia and there were concerts for the people of what was briefly known as Kampuchea, five years before Live Aid.
But wars come and go and Cambodia has been long out of the headlines.
However, its population are still wrestling their consciences over genocide as Sotho Kulikar's The Last Reel evidences.
It stars Ma Rynet as Sophoun, a young woman who is trying to find herself in post-civil war Phnom Penh.
She alights upon on old cinema where she is astonished to find that a beautiful young actress on a poster is her now-housebound mum (Dy Saveth).
Sophoun attempts to rekindle the past but, while doing so, stories of lost loves and the brutality of Pol Pot's Khmer Rouge emerge.
The Last Reel is handled with a sublime touch by Kulikar who allows important historical detail to come to the fore during a typical 'traditional father vs modern daughter' storyline.
Hun Sophy plays Sophoun's dad who has tried to forget a past in which he played a shameful role.
One might argue that the Last Reel's resolution is too easily achieved but, despite that, and its quite stilted acting, I found it to be a moving and important movie.

Director Sotho Kulikar: "The Last Reel portrays my belief in the overwhelming human need for stories and storytelling as part of the reconciliation process towards restoring a country and a culture that was devastated by genocide and war."

Reasons to watch: Addresses a important subject which has rarely been seen on screens in the west
Reasons to avoid: The actors' delivery is a bit stiff at times.

Laughs: none
Jumps: none
Vomit: none
Nudity: none
Overall rating: 8/10